In today’s Witchtember Tea & Tarot, I’m going to be working with my favorite deck to consult whenever I’m specifically thinking about my writing: The Literary Witches Oracle by Taisia Kitaiskaia and Katy Horan. The deck is tied to their book Literary Witches, and together they make a beautiful set to gift to any literary witch in your life! (I am not getting commissions to say that, I just really love this deck.)

Today’s tea of choice is once again part of the English Tea Shop family: White Tea Blueberry & Elderflower. This is a staple in our household, and it’s a great option for the mornings if I feel the need for something that will really open up all of my senses. And I’ll be drinking out of a delightfully witchy mug one of my best friends sent me on my birthday to get me hyped for the release of NASCENT WITCH.

I’ve also set out pieces of mookaite jasper, lepidolite, and a chunk of crystal quartz for this reading. Mookaite has the same protective qualities of any jasper, but it also affords the individual strength through personal growth that leads to better decisions, often through a flexible and widened perspective. Lepidolite is another gemstone that is protective against negative influences, and it also aids in transition towards personal growth. Crystal quartz has many uses, but today I’m interested in it as an amplifier for other stones. 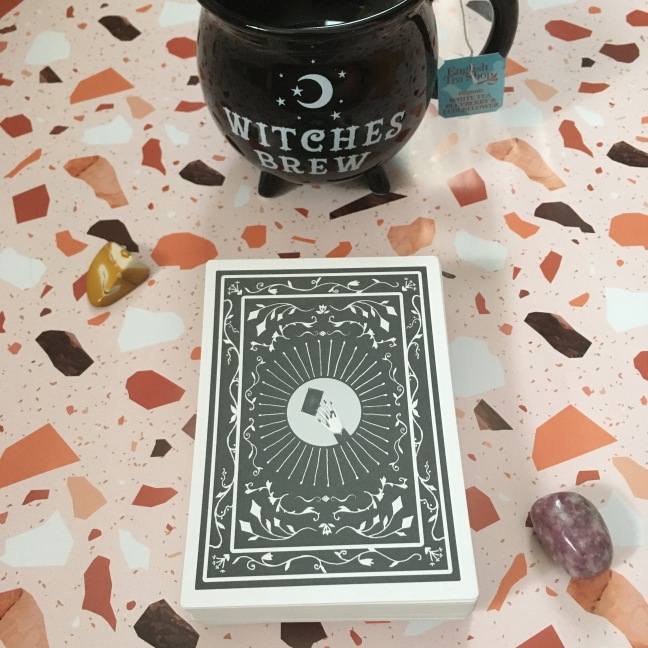 Now, let’s get this reading going!

I like to use a simple three-card spread when I work with this deck. The positions of the cards don’t mean anything in particular; I’m more invested in what they say as a collective. I’ll typically do a drawing from this deck after I’ve finished my morning writing meditation, as part of my journaling practice. 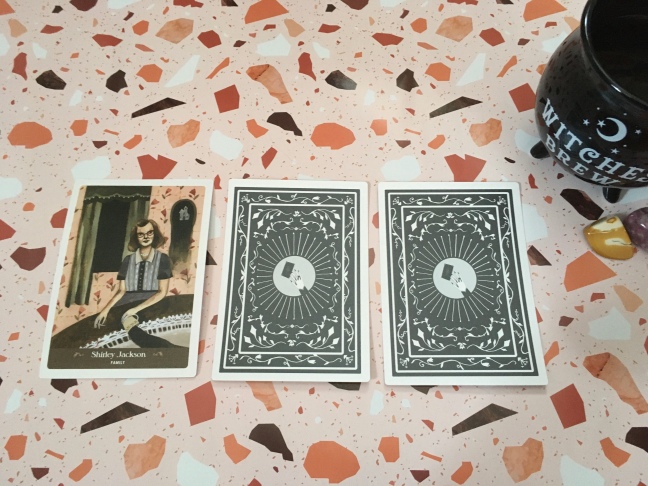 This first card is actually one of my literary favorites and a major influence on my work: Shirley Jackson, who in this deck stands for family. The deck also specifies that can mean “domestic pleasures; domestic horrors; partnerships and children.” This makes sense if you know anything about Shirley Jackson’s family life and/or have read her autobiographical works!

The second card drawn is the Peacock, which here represents “splendor; the divine; craving.” It’s also an animal that I associate with the maternal and my own mother, mainly because of a dance in the 1986 film Nutcracker: The Motion Picture.

Story break: this was the first film I watched as a child (my mother received the VHS as a gift for me from a coworker when I was about two), and with striking sets by Maurice Sendak and memorable choreography, its effect was quite formative. The filmmakers chose to transform the food-themed set of dances in the second half of the ballet into ethnic dances from around the world, focusing on where the foods came from (and resulting in some pretty cringe-worthy peak 1980s cultural misrepresentations). Arabian coffee was rendered a peacock and danced by the same ballerina who played Clara’s mother. My mother, a dancer herself, loved this solo and would often stop whatever she was doing to come watch it with me. Whenever I see a scarf or a dish with a peacock on it to this day, I’ll usually buy it for my mother.

The third and final card in this reading is Angela Carter, another favorite speculative author of mine (I actually love and actively read most of the women contained within in this deck, and those that I haven’t yet read I’ve added to my TBR list). This card represents identity; more specifically, the authors of the deck attribute to it “investigating identity; roles; who you are.”

This is a pretty intimate reading that’s really turning my focus inward. It’s also making me want to call my mother, which I think I’m going to do shortly!

Watch for more Tea & Tarot next weekend! And until then, call your mother or any other literary witch who has your love,
Melissa