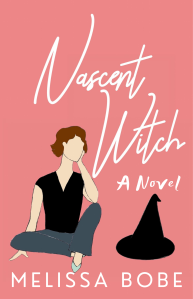 Sela Glaser is hurrying to one of her many temp jobs when she nearly runs over a talking cat named Sable. He reveals that Sela is a soon-to-be witch and he’s going to be her familiar. For a twenty-seven-year-old failed artist with heaps of student debt and no career prospects, this is pretty ground-breaking news.

As Sable prepares Sela for her Nascent Eve, a witch’s ritual initiation, she finds herself dreaming of witches she’s never met before. Then, Sela meets what very well might be the man of her dreams, or at least the one to save her from an endless purgatory of dating apps…if only she didn’t have to hide her witchy destiny from him. But when Sela’s Nascent Eve goes awry, she and Sable learn that unseen magic from her past is starting to wreak havoc on her already chaotic present, putting that witchy destiny of hers in jeopardy.

Sela has to figure out how to control her powers before things get worse, but a visit home reveals that fixing the past might be much more complicated than Sela or Sable realize. And when the witches from Sela’s dreams begin to appear in real life, questions arise about exactly what kind of witch this frazzled millennial really is.

All of this would be a hell of a lot easier to deal with if Sela didn’t have a magical stalker interrupting all of her most romantic dates, and if her familiar’s ice cream addiction wasn’t driving her further into debt. But what’s a witch to do?

If you are a librarian or an independent seller and cannot place an order through Amazon, please reach out through the Contact page on this site.