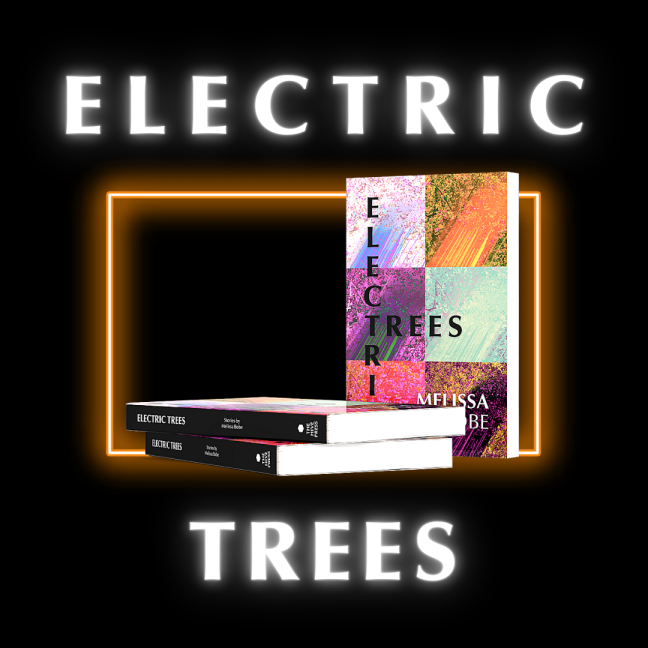 The first thing you should know about ELECTRIC TREES is that there are no trees in it.

Okay, that may be an exaggeration. There are probably some trees around somewhere; I mean, there are settings with trees in them. But the trees that the title refers to aren’t really trees.

Let me back up a bit. The concept for ELECTRIC TREES comes from this phenomenon called “electric treeing,” which as far as I understand it is when a fault in the insulation of something electrical causes a burst of current to shoot into that insulation, leaving behind a formation called a Lichtenberg figure, or an electric tree. Where did I learn this? I fell down a Wikipedia hole, of course! And I just became fixated with this idea that something so beautiful could be the result of error, an error we would never think to associate with trees (or at least, I personally wouldn’t) but that nevertheless takes a shape so similar to them.

Here’s a picture from that Wikipedia journey that helped inspire the concept of the book:

The three parts of the book, LIGHT, FISSURES, and OUTAGES, are tied to this idea of electrical function and malfunction. I’m no scientist or engineer, nor would I ever pretend to be one! But that’s the great thing about a fiction collection: once I had my basic concept, I could run with it. So, the stories form a progression, taking readers from a place of light to one of darkness. When you hit OUTAGES, my advice is to start reading during the day. I never really intend to write things that are creepy, scary, or horrifying, but according to my critique partners, beta-readers, and reviewers, I apparently end up doing so pretty often. Trust them, and keep the lights on for that last section!

Readers and friends have already pointed out themes and motifs they’ve noticed: water; animals; humans’ relationship with the natural world; unlikely friendships; haunting; risk. And each section has certain hallmarks: a flash fiction; a transitional story that leads into the next section; a workplace story. (I really didn’t mean to include a work story for each section, but I guess between switching career paths and scrambling to get a day job during a global pandemic, it happened!)

This isn’t the first collection I’ve written, but it is the first I’ve chosen to publish. Some of the stories are quite recent creations: “The Tuesday Murders” and “Skin Deep” didn’t exist at all until early this year, and “The Family Wolves” brought me through the winter of 2020 into 2021 (it’s not exactly a holiday story, but I could see reading it at that time of year and picking up some midwinter vibes). Other stories from the collection have been with me in one form or other for a long time: the idea for “All of His Loved Ones” came while I was shelving books in the very first library I worked for, back when I was around 17 or 18 years old. Certain obsessions brought the book together: the concept of electric trees; the series of photographs I’d created that make up the cover; the desire to give a home to certain stories that didn’t quite seem to fit the markets I’d sent them to; neon and bright, brash color; darkness, isolation, and a striving towards light.

It’s a solid little collection, if I say so myself. I am happy with many aspects of it: the stories themselves; the sections they form and the order they take; the cover art and design; the font selection and interior layout. There are some more surprises coming with the release of the ebook, which will occur in June, and I’m looking forward to promoting ELECTRIC TREES in all the bright neon strangeness I have planned. If you happen to pick up a copy, I hope you’ll enjoy it, and that at least one of the tales makes a permanent home in the back of your mind, the way the best short stories tend to do.