Every February, prolific authors, super-fans, and aspiring writers gather in Boston for a small sci-fi/fantasy convention with a lot of heart. Boskone was one of the first major writing-related events that Eva and I attended together, and we had a total blast!

While we were planning our trip, we referred to the event as our “Tamora Pierce Pilgrimage,” because Tamora Pierce was supposed to be the keynote speaker and we were hoping to bask in the glow of one of our writing hero-goddesses. Unfortunately, she had an emergency and didn’t make it to the conference; nevertheless, we found the trip well worth our time. We also got each other some awesome jewelry that we wore on said pilgrimage: 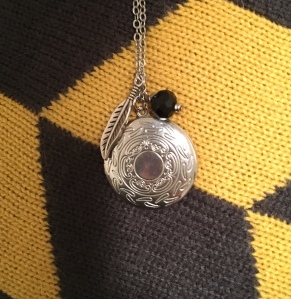 Eva got us matching lockets with a badass quote from Tamora Pierce inside, and because we’ve known each other since like the 10th grade and think in exactly the same way, I got us matching inspirational circle pendant necklaces. Neither of us knew the other was buying matching jewelry, naturally (a sign of pure magical girl friendship).

We chose to stay at an AirBnB (I had a bedbug experience five years ago; I’m still not over it and won’t stay at hotels). This turned out to be a great decision, because (1) we were able to cook dinner and write after the conference each night, and (2) as luck would have it, the apartment was stunning. It’s probably the nicest place either of us have ever stayed. We also believe in being prepared for anything (teacher ideology), so:

This is what I packed. She packed about as much I did. (No, I’m not kidding. Yes, it was a three-day conference. No, your judgment is not going to change me.) It took like four trips up the stairs to get everything into the apartment, but we wanted for nothing the whole time (#worthit).

We knew it was going to be a good weekend even before we got there. Instead of a rest stop, we popped into a Starbucks on the way up from New York, and found ourselves with omens of a good time:

We discovered a map with a happy whale and a bathroom that looked like it was from the set of a new sci-fi drama! Both very good signs.

Anyway, once we got to Boskone, we realized it was a smaller convention than we’d expected. At that point, I had only attended two events as a writer looking to break in: New York Comic Con and Book Riot Live, both of which were larger than Boskone. Surprisingly, though, the intimacy of the convention turned out to be a huge benefit to us.

Boskone holds an event type called a “kaffeeklatsche,” which is an hour-long roundtable coffee conversation with a featured guest, limited to about ten people. Eva and I signed up to sit with Bruce Coville, whose books we’ve been reading since even before we knew each other.

A little background on my relationship with this man’s writing: Bruce is the first author I articulated as my “favorite” in childhood, and I continue to regard his books as paragons of what children’s literature should be. More specifically for those of you familiar with his work, I reread Jeremy Thatcher, Dragon Hatcher countless times in middle school. And back when I was seven, I’m pretty sure I forced my mother to mail a letter where I begged for (possibly demanded???) the second installment in his Unicorn Chronicles. I profusely apologized for these written demands before taking this photo:

As for writing wisdom, he provided plenty. Eva and I became members of SCBWI on Bruce’s advice. We also had a really fun time meeting our friend Gwynneth, another guest at the kaffeeklatsche and a phenomenal storyteller. Since she performs narrative whereas I only write it, I’ll let her tell you the story of what hilarity went down during that coffee hour should you get the pleasure of meeting her, too.

We also attended several panels that were extremely helpful to us as writers, particularly one moderated by E. C. Ambrose on mistakes to avoid in the industry regarding publication, contracts, and agents. E. C. Ambrose was also very generous with questions we stayed to ask her after another panel she spoke on, and I joined Broad Universe after speaking with her further. Interacting with her was one of the highlights of the trip.

Indeed, a true spirit of generosity seems to infuse all the goings-on at Boskone, and it’s one reason I strongly recommend it to writers also looking to begin breaking in and networking at events that will help them do so. The convention, unlike so many others, also won’t kill your bank account: $55 will get you in for the full extended weekend, and it’s well worth the money. As for lunch, the food in the convention hotel is not cheap, but it is worthwhile:

We left Boston having learned much more about the industry we want to be a part of, and we managed to really enjoy ourselves. I also took home a book as a souvenir: Cassandra Rose Clarke‘s The Mad Scientist’s Daughter. I was missing the conference in the days afterward, and reading it helped ease the transition back to ordinary life.

And that’s how our trip to Boskone went! Definitely check it out if you’re a fantasy or sci-fi writer looking to break in, and feel free to ask me for more details.

Until next time, I wish you a galaxy of magical words!
Melissa